The Legacies of the Romani Genocide in Europe since 1945

This book explores the legacies of the genocide of Roma in Europe after the end of the Second World War. Hundreds of thousands of people labelled as ‘Gypsies’ were persecuted or killed in Nazi Germany and across occupied Europe between 1933 and 1945. In many places, discrimination continued after the war was over. The chapters in this volume ask how these experiences shaped the lives of Romani survivors and their families in eastern and western Europe since 1945.

This book will appeal to researchers and students in Modern European History, Romani Studies, and the history of genocide and the Holocaust. 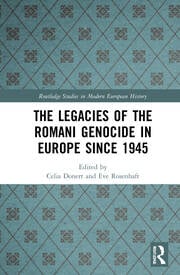