The Rights of the Roma

The Struggle for Citizenship in Postwar Czechoslovakia

The Rights of the Roma writes Romani struggles for citizenship into the history of human rights in socialist and post-socialist Eastern Europe. If Roma have typically appeared in human rights narratives as victims, Celia Donert here draws on extensive original research in Czech and Slovak archives, sociological and ethnographic studies, and oral histories to foreground Romani activists as subjects and actors. Through a vivid social and political history of Roma in Czechoslovakia, she provides a new interpretation of the history of human rights by highlighting the role of Socialist regimes in constructing social citizenship in postwar Eastern Europe. The post-socialist human rights movement did not spring from the dissident movements of the 1970s, but rather emerged in response to the collapse of socialist citizenship after 1989. A timely study as Europe faces a major refugee crisis which raises questions about the historical roots of nationalist and xenophobic attitudes towards non-citizens. 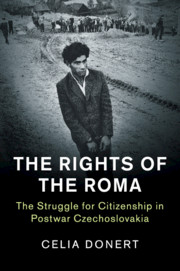